Edit
watch 01:36
We're Getting Mutants in the MCU - The Loop
Do you like this video?
Play Sound

The Mage is one of eight class archetypes in Ashes of Creation . They are masters of the arcane and lords of the elements. Using their unique knowledge of magic, they can alter perceived reality to suit their needs and damage their foes. Mages are a high damage burst, low defense class.

The primary weapon for the mage is a Spellbook

Abilities and names are subject to change.

Fireball - This is a fast cast targeted spell that does fire area of effect (AoE) damage.

Lighting Bolt - This is an action based ability that applies a bolt of lighting in front of the mage. Enemies in the proximity of the bolt will take damage.

Teleport - The mage will instantly move a short distance ahead in the direction they are facing.

Mirror Image - A shimmer effect (shield) will envelop the mage, increasing their evasion by absorbing a limited amount of damage. Effect ends when the limit has been reached.

Ultimate - Earth Eruption - A telegraphed ability that will cause an earthquake on the ground in front of the mage. The quake will trip and damage enemies in its path.

Utility skill - Detect Magic - The mage will be able to detect magically hidden points of interest such as illusions. 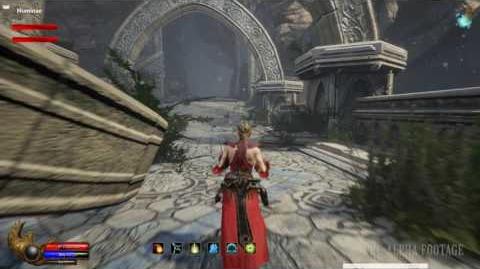