The Cleric is one of eight class archetypes in Ashes of Creation. They are the ones commonly looked to for healing and are often considered vital in large groups. This doesn't mean they can't fight, however. Clerics have both heal and damage abilities.

The primary weapon of the cleric is a staff.

Abilities are subject to change. Names of abilities may also change.

Spot Heal - This is a targeted effect that applies an instant heal as well as a heal over time. This ability will also do proximity damage over time (DoT) to nearby enemies.

Balance Life - This is a targeted area of effect heal (AoE) with a ground visual effect. Allies in the target will gain health while enemies will lose health.

Balance Life (secondary effect?) - This ability takes the total health of all party members combined and redistributes it back equally to each player.

Chain Heal - The cleric will target a single party member and apply the heal spell. The effect will jump to other players, increasing in power with each jump. The effect will apply burst damage to enemies in range.

Ultimate - Divine form - The cleric grants a party-wide buff to healing and damage. This ability applies a heal over time to allies and a damage over time to nearby enemies. While this ability is being channeled, the cleric will hover a short distance above the ground. 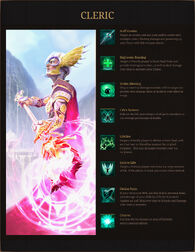