There are currently 8 primary archetypes in Ashes of Creation that will determine the character playstyle. These are Mage, Summoner, Cleric, Bard, Fighter, Tank, Ranger, and Rogue.

Some time, after getting used to the world of Verra, players will be able to choose a secondary class. This will augment the abilities and playstyle of the character. For example, a fighter that charges on enemies may choose Mage as a secondary class, making them a Spellsword . Instead of charging to the enemy, they could instead teleport, eliminating the time it takes to close the distance. If a player wanted to play a Tank to its fullest ability, they would want to pick tank as their secondary class as well, and become a Guardian .

Choosing which race to match to an archetype will matter to a degree. Races affect stats, which in turn affect skills and abilities. In addition, races will add a specific 'flavor' to abilities. While a race's traits may influence an initial archetype choice, there will not be any race-to-class restrictions.

There are currently no plans to include skill trees.

These are a combination of Primary and Secondary Archetypes.

Base class, then add secondary class: 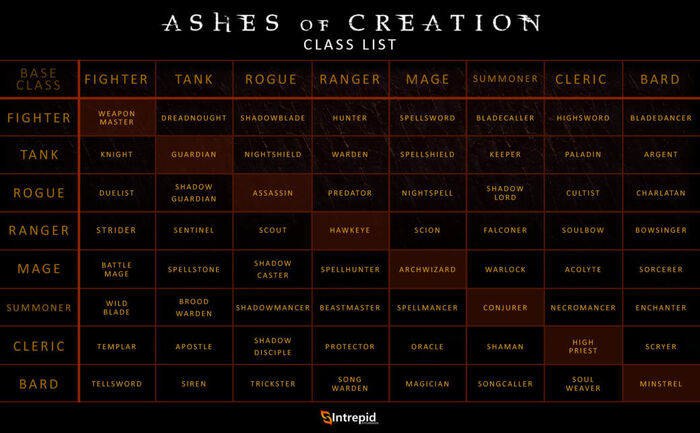